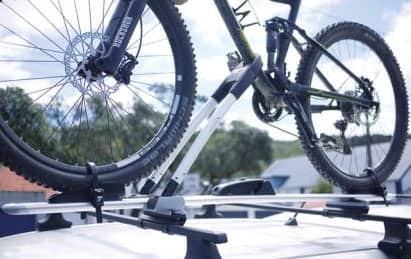 Whispbar is a New Zealand company, staking their claim in the rack world by making very quiet (and stylish) racks. Fitting the rack was easy, using the clear instructions and single allen key provided it took about fifteen minutes. It’s also very easy to remove the rack and tray from the roof-bar mounted fitting – this takes about 30 seconds, as does putting it back on again. Seeing as the whole rack is symmetrical, it could be mounted on either side of the vehicle.

I mounted it to my Toyota Hilux ute, which because the roof is higher off the ground than most car, makes getting bikes onto roof racks a touch harder. It was no harder or easier in this respect with the Whispbar rack. I tried four different bike up there and all mounted into the jaws with no issues. Clamping a bike in place is pretty easy – pushing down on the centrally located hand-sized ‘button’ closes the rack’s jaws around the bike’s downtube. Then the two wheel straps are cinched down and you are good to go. There are two lengths of wheel straps included in the box – I needed the longer ones to get around the relatively deep sections of Enve wheels and with deep sections rims becoming more common, it was nice to see them included.

Not everyone was convinced the ‘whisper’ part would work. For example, the Editor said he thought the bike would make the most noise, so the rack wouldn’t be a big factor. But that’s not what I found. The rack is quieter than my other rack – I can ‘hear the lack of noise’ both when the bike is mounted on the Whispbar and when it is not. I’m not sure if it’s the shaped fittings, or something about the rack itself, but something up there isn’t making noise...

In terms of security, a key-lock on the clamp button locks both the jaws of the rack, so securing the bike, and the rack itself to the bar simultaneously. This seems a very secure system.

I had only one minor issue during testing, which was that occasionally the locking mechanism wouldn’t close on my first attempt. It needed to be jiggled a bit (while holding the bike up with the other hand) before it would close.

Otherwise I was impressed by the Whispbar rack – it was easy to get a wide range of bikes into, it held them securely and true to its name it was noticeably quieter than my other roof racks.