YAKIMA LEGENDS - Cas & Jonesy
We said you could ask them anything... and you did!
Joss Guyer
In places of extreme pain and desperation what was the one thing getting you out of that dome of relative comfort?
We asked it for…so we weren’t going to complain or give up on something we’d worked so hard for. Plus you didn’t want to let that other person in the tent down
Diane Haas Gillen
There is a poney under the ice some where? When the decision is made you can accomplish anything!!!!
What Poney??
Craig Fisher
Anything?
Still waiting Craig…
Sharon Ladin
What's the next place/ obstacle you are going to cross together?
Love the question and we’re itching to answer but things are wrapped up for another couple of months for now…you’ll find out soon!
Leanne Mayer
I want to know that too. What expedition are you planning next?
As above.
Josh Prosdocimi
Do you think there will ever be a boy born who can swim faster than a shark?
Ha ha I think we’re fighting a losing battle there. Millions of years of evolution batting against us! Defintiely the shark!
Josh Swords
Do you feel that your two major expeditions stripped you back to who you really are deep down, and have you changed as a ocuse of that??
I think whilst you are on these expeditions it definitely breaks you down to the core of what makes you up and is great for you to self analyze yourself!
I don’t know if we’ve changed at the deep core of who we are BUT it definitely has given us a different perspective on life…minor annoyances aren’t anywhere as bad some of the situations that we’ve been in on our expeditions.
Gregory Smith
How are you planning to top the ‘Crossing the Ice’ expedition?
Top is a very dangerous word…I think if you get in the trap of trying to “top” the last expedition, you might find your self on an expedition where you have bitten off more than you can chew… 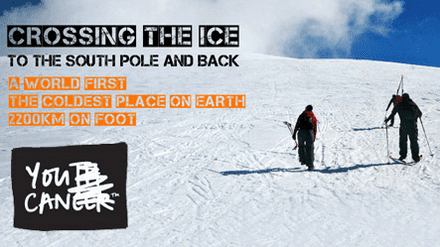