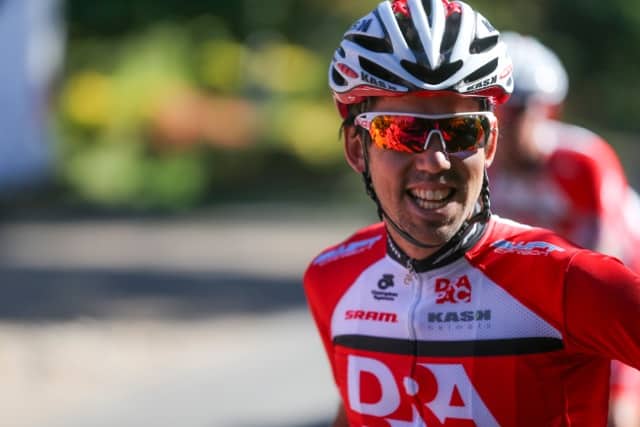 Fresh from his trip to the states to ride in the Tour of Utah, road biker Lach Norris took time out from his training for the Tour of Tasmania to answer some fan questions.

Terry Smith: How many bikes do you own and what different types?

That is a good question Terry, as many bike enthusiasts know, they tend to accumulate... The bikes with the least dust are my Swift Ultravox training bike (This is kept at home, while we have another with identical setup that goes to races) and my Swift Neurogen Time Trial bike, these two are used on a daily basis for training. Next up is my townie, which again, gets a fair work out to and from the shops. Then there is my fleet of MTB's for the occasional fun ride out in the bush, I have a hardtail and duallie and a longer travel duallie, which are remnants of my XC racing days. To round it out I have a BMX for, well, just in case!

Ben Maden: How much gear do you pack for an international training / race meet?

Suitcase packing becomes a fine art after a while. Basically as a rider I am restricted to a suitcase and carry on case, which covers all of my racing kit, clothing and personal items. The team usually travels with 2-3 bikes per rider, along with the mechanics stuff (toolboxes, stands etc) and the Soigner stuff (massage tables, bidons, race nutrition, first aid etc.) We often have interesting moments at check-in counters at airports when we arrive with 30 or so bulky items between half a dozen people!

There are some pretty tough climbs that come to mind, but I would have to say having recently experienced the Bicycle Network "3 Peaks Challenge", the Omeo side of Falls Creek in the Victorian alps is a hard one to block from memory. Mt Wellington in Hobart is another brutal one, which we will be looking forward to in the Tour of Tasmania next week.

Steve Dardaganis: How do you maintain swag whilst battling away on a climb?

Haha I'll take that as a compliment Steve! But I'm afraid that there is a certain point when climbing fast that all composure goes out the window, for some it's earlier than others but I think we have all felt our faces contort at some point or another when the going gets a bit too tough! Although I must say a good cheering crowd on a climb gives you reason to get your style on and pretend that the max effort isn't affecting you.

Belinda Edwards: Do you have any tips for other climbers?

It hurts. For long periods of time. If we could sprint fast we wouldn't have to battle away on climbs, but hey, you have to make do with what you have!

Danielle Crome: How did you turn pro with Drapac? What’s the process for being asked to join a team?

It's a bit like the 'real world' in some ways, usually to get onto teams you need to have the experience, results and attributes that they are looking for and this has to line up with what you as a rider are looking for in your career. I have been fortunate enough to have had a long history with the team which started off like most things do, through word of mouth and an application for the job!

John McAlpine: What is a typical day for you?

There are not a lot of typical days in season to be honest. I find I am often finding new routines to fit in with training camps, race days, travel days or training at home. If I am at home I like to get my ride or first session out of the way in the morning when I can best focus and have the most energy, which gives more time for recovery in the afternoons and seeing to anything else that needs to be done. On a race it really is a matter of being dragged around to a schedule, eating, sitting on a bus, racing, eating, getting to the hotel, massage, eating, sleeping.

Andy Fellows: What's the biggest rack you're experienced and could you handle it??

Well Andy I like to think I'm a bit of a High Roller kind of guy...

Ruth Dunn: What’s going to happen for you as a bike rider – what do you want to do?

The beauty of it is, I'm really not sure! I would like to think I have many years left in my career and that I will continue to improve and be given opportunities to compete in some of the biggest races around the World.

Tell us about the Tour of Utah.

This years of the Tour of Utah seemed particularly brutal. The stages were long, it was hot and there was so much hard climbing. The altitude up there also plays a big part and while people think that because you’re a 'climber' the climbs don't hurt as much, well the truth is they hurt just the same, if not a little more, they just go a bit faster! I had some good form and was able to hang in there with the select group of about a dozen guys on all of the hard days this year, which landed me a couple of top ten stage results and 10th overall in the tour, which was pretty much a career highlight!

At this time of year there is always a lot going on with teams and riders and planning. As yet I haven't sat down to really nut out my plans for next season but I hope to again have some opportunities to ride as a GC (General Classification) at some of the harder stage races.

Big thanks to Lach for taking time out of his training to chat with us - you can follow his racing achievements at Drapac Professional Cycling on Facebook or follow Lach personally on Twitter. Good luck in Tassie, Lach!