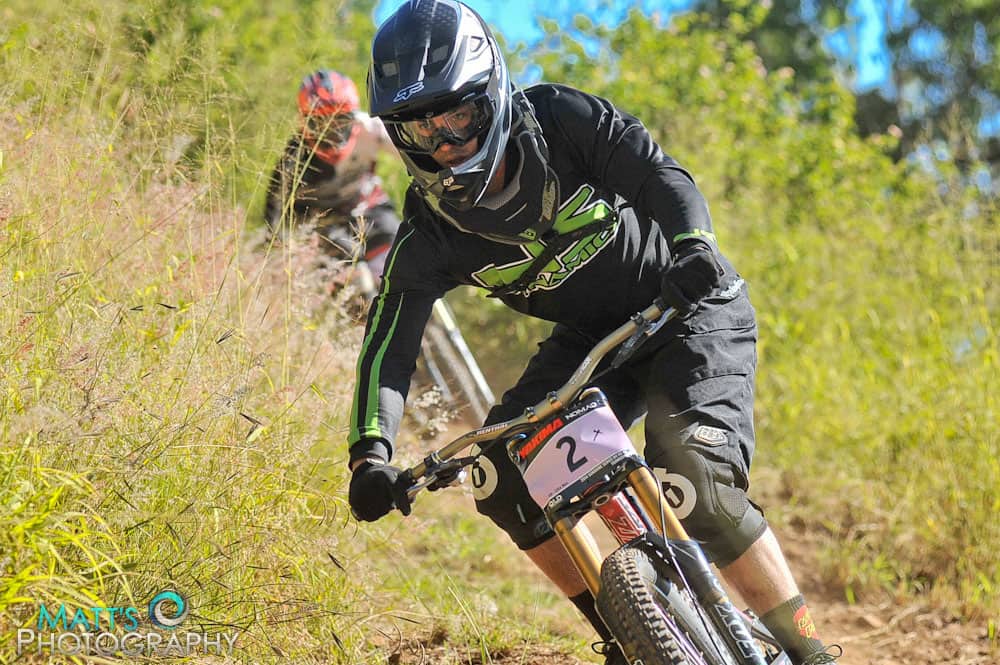 Round two of the Yakima Sunshine Series for 2014 headed to Toowoomba with riders getting up the range for a few wild runs down the famous “Mackenzie Frenzy”, Tbah’s iconic DH track. The Frenzy is known and loved for its high-speed sections, big senders and loose rocks. The loyal trail crew at Toowoomba Mountain Bike Club had the track running fast with a few sweet new features. Early on Saturday morning there was some crazy grip up on track for the first few practice runs, but with 200 riders about to hit the mountain, it didn’t last long. Downhill races in Toowoomba always come with a great atmosphere and this weekend did not disappoint. 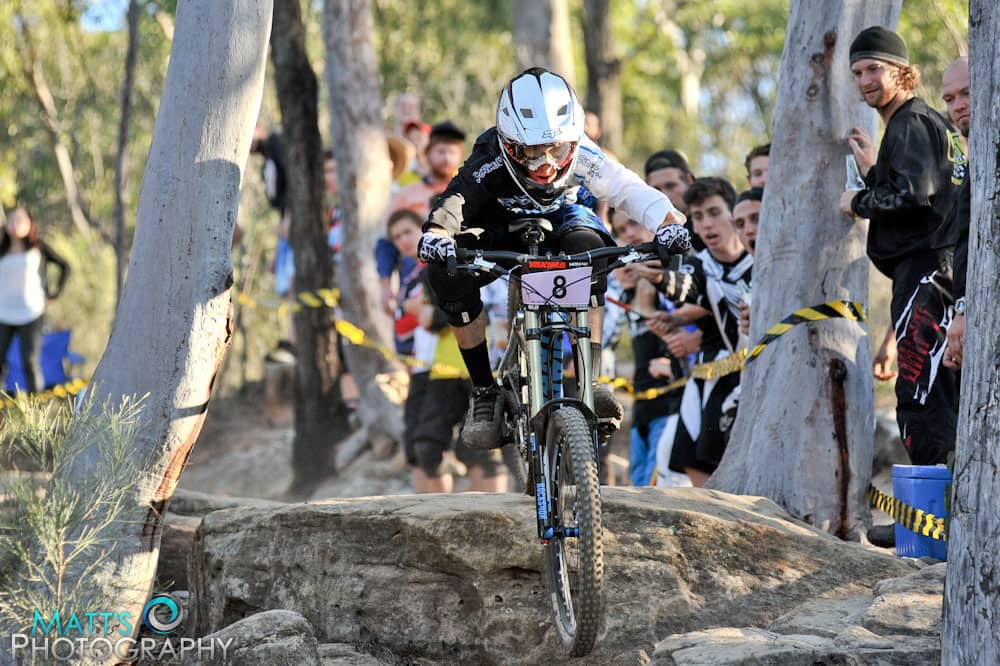 Lindsay Klein was pivotal in the development of the Frenzy DH track. Back in 2004 he headed up the building process, assisted along the way by Jared Graves and a heap of Toowoomba based riders. Back then Lindsay was racing on an Orange 223 for the Global Racing team. Since then the Frenzy has been an annual highlight of the SEQLD DH series – there is a bit of uncertainty about the exact dates, but this race could well have been the 10 year anniversary for the track.
Lindsay is coming off a big result at the Cairns World Cup, pulling 41st place. Pretty awesome considering he only went in with hopes of qualifying, and the conditions made for one of the wildest mud runs he’d ever done. For Lindsay time on the bike at the moment is split between Downhill and Enduro. The Giant AMC team, which he is part of, are racing the SEQ Enduro series and a few Enduro races in NZ, Lindsay will also be at all the SEQLD DH races and potentially a few National rounds.

“The fact that trail bikes are basically mini downhill bikes is what really got me into it [Enduro]. I can go out for a trail ride and hit downhills like I do on my DH bike and it’s so easy just go out for a ride on the local trails whenever I have a spare hour or two.”

After steering his Glory to a clean run down the Frenzy on Sunday Lindsay knew he was in for a good result – 0.058 seconds ended up being the margin in some good close racing – Lindsay took the 2nd step on the podium. Check out this footage of Lindsay pinned through the rock garden on the Frenzy: http://www.pinkbike.com/video/364673/ Max Warshawsky has been building quite the reputation for himself on the SEQLD DH scene over the last few years. Only 16 years old and Maxy is the current QLD state champion from 2013. He has already stepped up onto the podium six times in less that two seasons of elite racing at state level – that’s not counting the countless podiums in the junior ranks, including National Championships. Max is a humble kid with a great attitude towards the sport and a big future. The World Cup in Cairns was a wild experience for Max, racing on the world stage for the first time in hectic conditions he qualified 7th but had to finish his race run with no rear brake! With a few more World Cups in his sights this year Max is looking to be ready for new experiences that he can learn from at the next level.

Maxy always looks fast on track, railing his Demo around corners and boosting off everything – sometimes a little too much! The first loose corner of the Frenzy track caught a few riders out, including Max. Check out this footage of his crash on Saturday in practice: http://vimeo.com/96415319 . After struggling to stay on the bike in his last few race runs Max was keen to put down a safe run on Sunday arvo, which he did, coming in 3rd in elite at the end of the day, less than 1 second off the win.

Akira Yamada came into the second round of the series at Toowoomba with some well-earned confidence after taking a 3 second win in the under 19’s at Cedar Creek for round 1. He is hungry for the series overall title and looking towards a podium result at QLD state champs at Illinbah later this year. Keep your eye out for Akira at a few National rounds too, he’s keen to see what kind of damage he can do at the next level of competition.

Sunday’s race run down the Frenzy went pretty well for the young pinner, only some small mistakes here and there – but as Akira said after, “Mistakes are essential to learn from”. Finishing with a time of 3:01 put Akira 1.1 seconds off the win in 3rd place, with a time that was respectable among the elite boys. Get on board with Akira for a run down the Frenzy here: http://www.pinkbike.com/video/363969/ 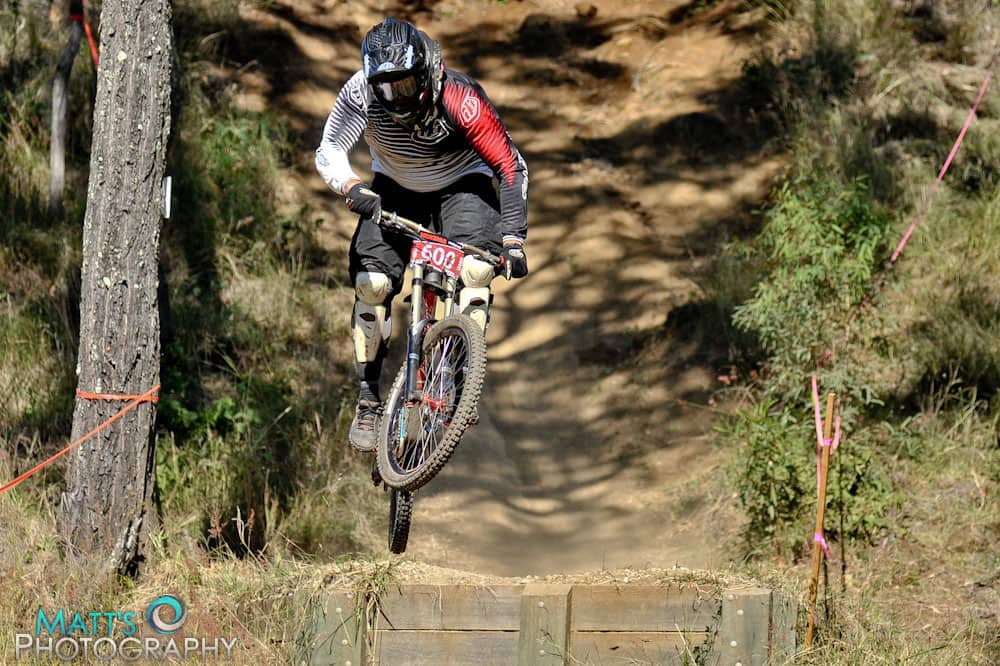 Michael Dopson took the win in a competitive Master’s class on Sunday, just keeping in front of his good mate Graeme Reid. Mick has been racing downhill in SEQLD for about 6 years now, he says he started out just to get fit but got smashed by the biking bug! Like most weekend riders, Mick has a job and family to look after, but on top of this he is getting active in the gravity mountain biking scene.
Mick is passionate about mountain biking and has a big vision for making the sport more accessible to the community. Part of this vision has been starting Brisbane Mountain bike Shuttles (BMS), Mick runs shuttles with his Troopy and trailer setup most weekends, whether it’s at a race, open day or running shuttles at Mt. Joyce – a venue which has seen a lot more tyres hitting the dirt thanks to the service BMS provides. If you head out with Mick and BMS you might get the chance to test ride some sweet new Santa Cruz steeds too! 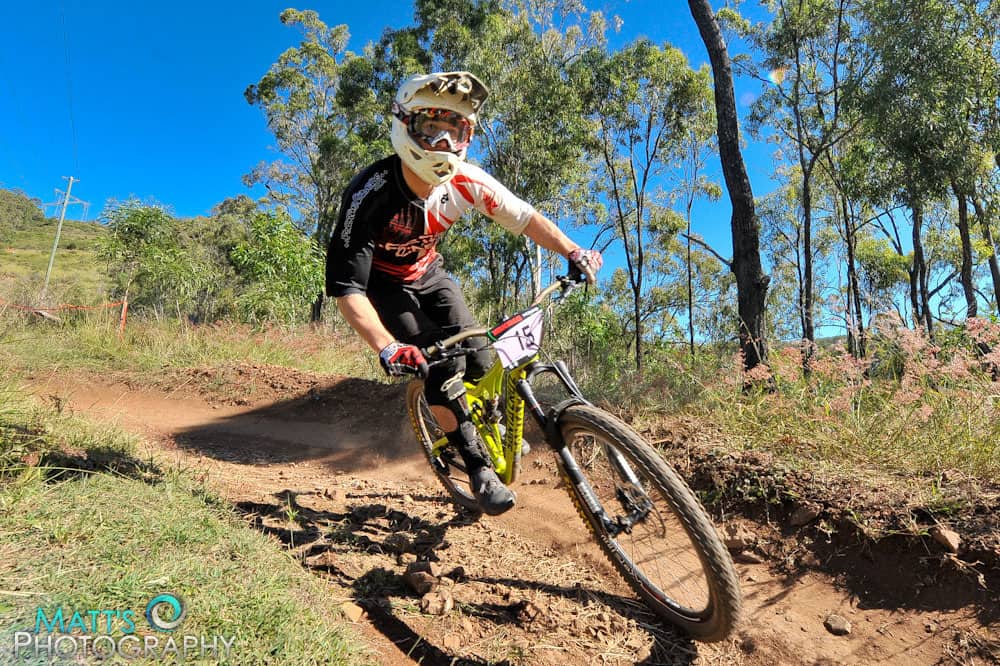 Tim McCullough is a bit of a veteran of the scene in SEQLD, showing up to race bikes for 13 years now. In recent years Tim has been hammering down the DH tracks on his carbon Santa Cruz Bronson, which he also races the SEQ Gravity Enduro series on. On Sunday Tim piloted the Bronson to a respectable 13th place down the Frenzy, sitting just outside the 3 minute mark that he was hoping to crack. Tim’s thoughts on racing DH on the little bike:

One of the big contributions Tim has made to the scene has been the support from “For The Riders” (FTR) – the Brisbane based bike shop he co-founded with Michael Geale 10 years ago. FTR has been affiliated with the series since that time, supporting some of the fastest riders that SEQLD has produced. 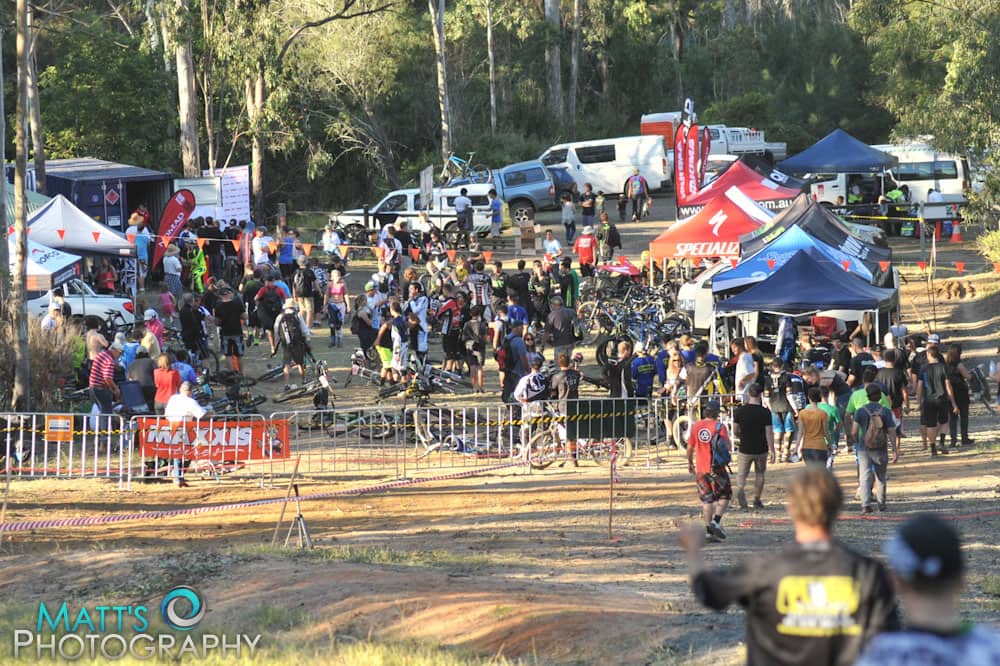 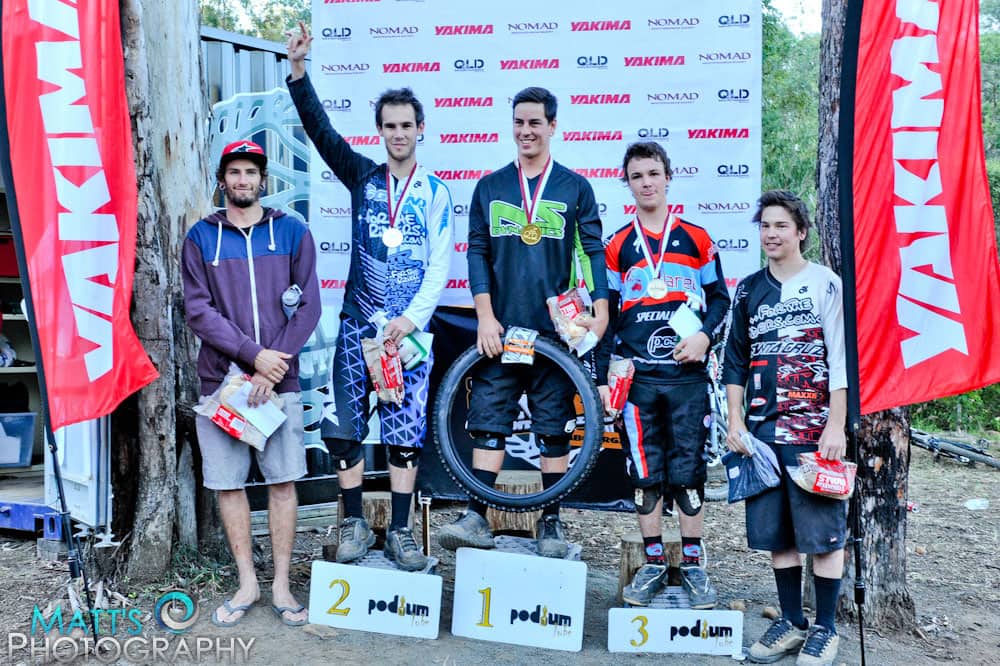 Ben Power has been impressing people with his raw speed and crazy cornering ability for a few years now. Ben has a bit of overseas experience under his belt with the Aussie junior team a few years back, and he has recently put up some great results with a 9th at National Champs in dry and dusty Bright against a stacked field, he followed that up with a good run at the Cairns World Cup to take 53rd spot in the mudfest. Like Lindsay, Ben was just hoping to qualify so his result was a big success! It seems he can perform well no matter what the conditions. Ben has been riding for the NS Dynamics team aboard his carbon Santa Cruz V10.
On Sunday in Toowoomba more than a few people were saying that he looked like the man to beat. The racing at the top of elite was tight with the track running fast, riders just had to make sure they didn’t fall victim to any of the blown out sections that come with two solid days of 200 bikes hitting the dirt. As the top 10 elite qualifiers came down the times kept dropping. Lindsay Klein put in a time that looked like it could have been a winner, only Ben remained on track. As he crossed the line there was a moment as the timers processed the result – finally it was Ben Power for the win by a margin of 0.058 seconds. Ben has won a heap of state series race in under 19’s but this one was special, a maiden state series win in elite. The field is competitive but Ben is now leading the overall and will be looking to take out the series.

The weather was perfect for a day of racing with barely a cloud in sight, there was an awesome atmosphere out on track. Come race runs the rock garden was lined with rowdy spectators, heaps of cow bells, one dude even brought a chainsaw out for the occasion. With 200 riders along for the event there were plenty of family and friends along to cheer riders on. At the beginning of the weekend a fair few riders felt that the track had been built up and benched a lot more than in past years but it didn’t take long for the rough Frenzy runs to start bringing out the rocks, dust and holes. There were more than a few flat tyres and a handful of unlucky riders who were claimed by the final jump. The classic track with a long legacy of appearances in the series didn’t disappoint.

At the end of the day Jodie Harris took out the elite women to make it two wins in a row to start the series. Kylie Jackson took 2nd and Victoria Foster stepped up onto the podium for 3rd. Young Niki Barber, riding for Ashgrove cycles, took the win by a fair margin in the under 15’s. Ricko Levinson took a solid win in the hardtail class – which saw a fair turnout. Local under 19 rider Andrew Cavaye put down a 2.55 in seeding, which would have been top 10 in elite, however he couldn’t hold it down, crashing in his race run – but still good enough for 2nd in under 19’s, Akira Yamada took 3rd and Harry Bush took the top spot. The top five in elite saw Ben Power, Lindsay Klein and Max Warshawsky go 1,2,3. Liam Paiaro rounded out the podium in 4th, getting his revenge on the track that claimed him in 2013, and Darcy Murrell finished in 5th.

Big thanks must go out to the Toowoomba Mountain Bike Club for putting on yet another great event and to all the sponsors who make the series happen. Round 3 of the Yakima Sunshine series is coming soon, on the June long weekend, from the Gold Coast based Outlook crew with their new track at Boomerang farm.

Full results can be found HERE