This article by Iain Treloar was originally published at cyclingtips.com in October 2018.

There’s a series of sepia photos from the ‘80s, offering a perfect glimpse back into the lives of its forgotten subjects. In one shot, a group of six friends lie back in their kayaks, eyes closed, basking in the sun. In another, a trio of hikers with massive backpacks and skis on their backs smile at the photographer. In another still, a guy poses next to a boxy hatch with two mountain bikes on the roof.

At a glance, there’s nothing to link these photos, other than this one common thread – the sunkissed glow of health and youth and vitality that shines from the pictures, decades on. These people are outdoorsy, practical-looking folks – the kind that hike, and bike, and sleep in the woods. And there’s one other thing: these pictures are all from bike rack company Yakima’s archives, and those in them are all Yakima people. The people might have changed, but the vibe’s still there.

Founded in 1973 in the city of the same name in Washington state, Yakima got its start as a husband and wife-owned machine shop owned by Otto and Jeanne Lagervall. They didn’t do big business, but they did good business, underpinned by their company motto “let us serve you with honesty, wisdom and skill”. Otto was a tinkerer and inventor (allegedly designing the first fold-up music stand) who was also a keen kayaker, and produced racks for cars.

In 1979, a couple of outdoorsy folks – Steve Cole and Don Banducci – bought Yakima Industries from the Lagervalls, and moved it to Arcata, a highly progressive town in California’s northwest, ringed by river canyons and redwood forests.

It’s a place where walls of fog roll in from the bay, a place of greenery and soil that encourages exploration and entrepreneurial spirit. Steve and Don – a quiet, slow-talking ‘mad scientist’ and a wild entrepreneurial mind, respectively – assembled a team of like-minded folks and settled into an increasingly productive existence of manufacture and recreation.

In the lush surrounds of Humboldt County, Yakima had found its new home.

Centre: Steve, Don and the Lagervalls. Left and right: Yakima's spiritual home among the redwoods.

At around the same time as Yakima shifted operations to Northern California, an industry-shaking shift was taking place in the cycling community. Early pioneers in Colorado and the Bay Area were designing the machines that would be the first mountain bikes, and a generation of riders and adventurers – desperate to escape the clatter of the cities – took to wilderness areas. Outdoor sports boomed, and people needed a way to transport their gear.

Yakima, a company made up of exactly those people, knew what was needed and was uniquely placed to produce it. “From the bottom up, we have … the outdoors passion for what we’re doing, and a certain amount of what I like to term ‘jackassery’. That’s important for a company, and we’ve been doing it all along,” explains Chris Sautter, the brand’s longstanding Product Development Director.

Alongside the existing kayak carriers, Yakima branched out with the 1A Raingutter Tower, an innovation allowing roof-racks to be fitted to cars without roof-rails or mounting points which quickly became the industry standard and remains in the range today. The company’s output and reputation continued to grow, along with its range.

If validation was needed, Yakima got it in 1984. A thousand kilometres south of the brand’s headquarters, Los Angeles was gearing up to host the Olympics and the organisers needed someone to kit out the vehicles with racks. Just five years after the company’s rebirth, they got the contract, decking out Buick Estates with roof racks capable of carrying five bikes and 10 spare wheels.

One of Yakima's first forays into neutral support.

The LA Olympics would prove a watershed moment for road cycling’s popularity in the United States. Connie Carpenter-Phinney took a nailbiting victory in the women’s road race; Alexi Grewal rode a tactically masterful race to claim the men’s road race. Twin gold medals in the road race for the home country, and a strong showing across the other disciplines, sparked a national love of road cycling – and Yakima was the brand these new enthusiasts went to for their carrying needs. 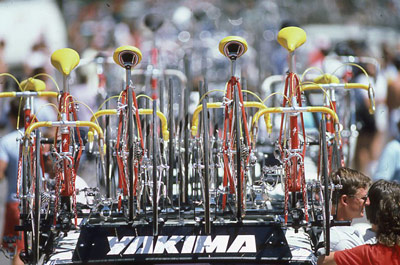 Yakima’s association with the road scene continued through the sport’s American heyday, supplying Team 7-Eleven, Tour de Trump and Tour DuPont to name but a few. The Tour de Trump was televised in more than 100 countries over five continents in its short-lived quest to be America’s Tour de France. Among the race’s supporting partners, Yakima had higher billing than fellow sponsors including Timex, Nike and BMW. Thanks to this exposure, cars festooned with the brand’s racks covered in road bikes became an increasingly common sight.

Yakima's grassroots support of road cycling saw their racks on tech support and team vehicles at the Coors Classic and Tour de Trump, among others.

Yakima continued to expand its range, demonstrating substantial engineering chops in the process. 1995 saw the introduction of two landmark products to the range – an integrated locking fork mount, and the Q Towers, a reasonably-priced item which allows the fitment of roof racks to cars without roof rails. Like the 1A Raingutter Tower, this product’s a testament to the durability of Yakima’s designs, remaining in the range decades later. The addition of racks like the paint- and carbon fibre-friendly HighRoad, which fastens around the front wheel rather than the frame, have cemented the brand’s gear-first reputation.

Yakima’s evolution has continued over the years since. A move to Portland brought the company to a larger city and the possibilities therein, whilst allowing them to maintain a strongly pro-outdoors identity. With the acquisition of New Zealand brands Whispbar and ProRack, Yakima was able to incorporate greater aerodynamic and fuel efficiency into its range. It also allowed the brand to build a greater presence in the Southern Hemisphere, particularly in Australia where Yakima Australia now exists as a sister company.

Yakima is no longer a couple of hippies in the woods – it’s a global business, with staff spread around the world, including 100 in Portland, 50 in Brisbane, and a handful in Europe and New Zealand. But despite the broad geographical spread of the company’s employees, there’s a unified-enough company culture that “Yakima is still Yakima at the core,” according to Sautter.

Decades into the company’s long journey, there’s a longstanding awareness that passion can’t be bought, but needs to be nurtured and lived. Russ Jacobsen, Yakima’s Director of Quality who started with the company in 1991 and shifted with them from Arcata to Portland, has a long-enough memory to be able to place Yakima’s current culture in its correct historical context.

“Right now we’re closest to where the company was when I started,” he says. “The people in the company now are back into the ‘work hard, play hard’ kind of culture.” For the crew in Portland, that means taking part in regular lunch rides, or supporting the fertile cyclocross scene of the Pacific Northwest. For employees in Brisbane, that means shredding the local mountain bike trails between conference calls.

Yakima's products are designed to be lived with – and lived well.

Australia’s landscape is a very different one to the mossy, misty Pacific Northwest and Northern California – it’s drier and dustier, with a yawning vastness to it. But for the same reasons that Yakima has eked out a strong presence in the U.S., its products are proving equally valuable to the same types of users in Australia.

Yakima people, then and now, are adventurous types with dirt under their fingernails who care more about their gear than their cars.

“Our soul is in the activities,” says Sautter. Today, decades on from the company’s founding, there remains a common purpose to the brand, articulated best in the brand’s values: “Connecting you, your friends, family and all your favorite gear to your desired destination or activity”.

Just like in those early photos from Yakima’s archives, memories are still being made with the brand’s products. An open road, a bike on the roof, and wilderness to get lost in – that’s the Yakima way.