Yakima's recently released FoldClick bike racks are a new step for the American gear haulage and carrying company. Yakima have a few classics in their range of rear-mounted bike racks with dependable models like the HoldUp and TwoTimer and the more recent Dr. Tray - but none have the range of features or versatility that the FoldClick series has. Coming in both a two and three bike model, the FoldClick range folds away for compact storage - which you might have guessed from the name. We had a Yakima FoldClick 2 on test and it was barely over 14kg, which is substantially lighter than many rear mounted racks that can be up to and over 25kg. Extra weight does make a rack pretty bomber, but it can also be really hard for some people to fit. The combination of lower weight, easy fitting, compact size and even an add on ramp to help get heavy bikes on (think eMTBs) makes the Yakima FoldClick 2 appeal to a different range of people compared to something like the Dr. Tray which might be your choice for shuttling bigger bikes. 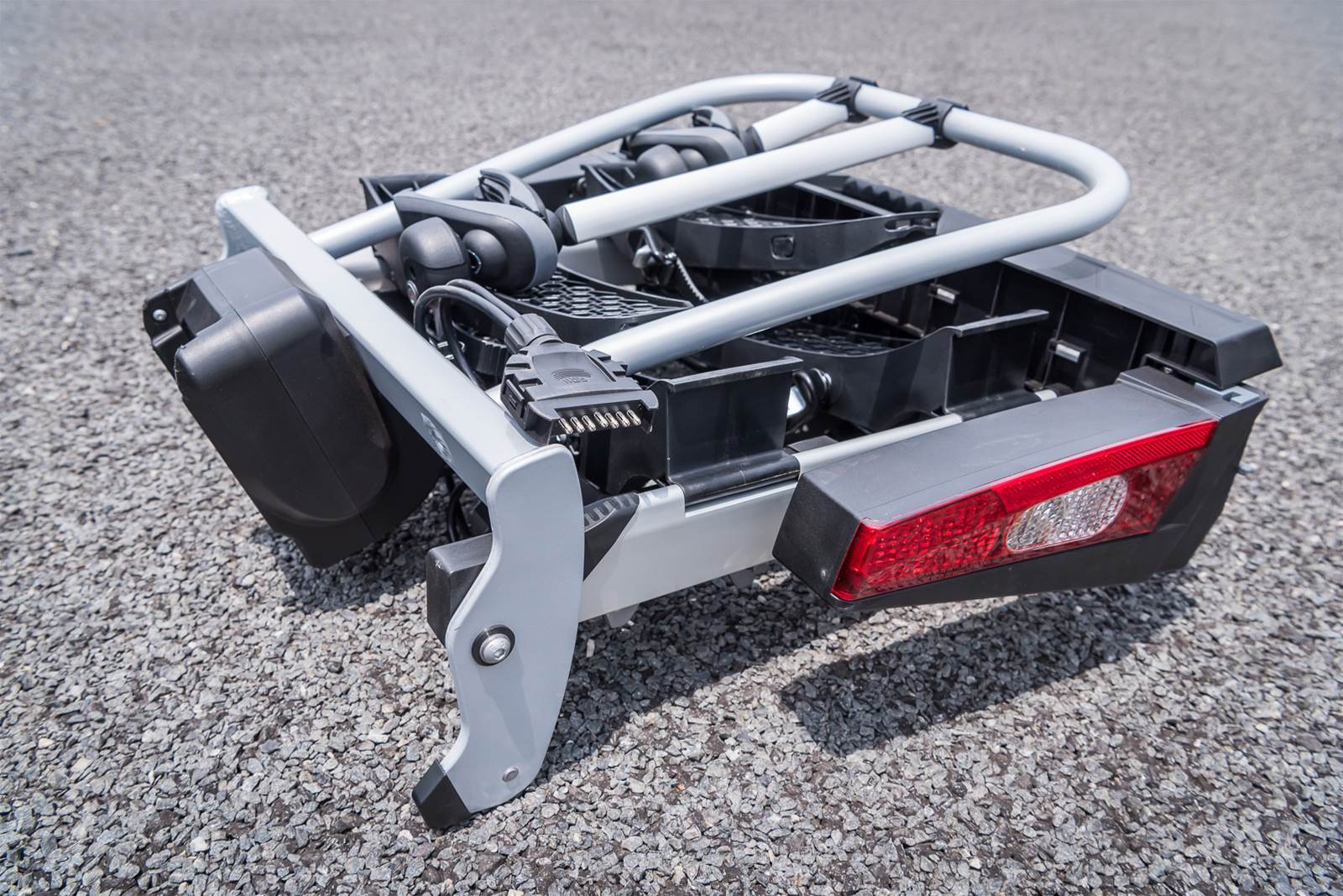 Another addition for Yakima is built in lights and number-plate board. Depending what state you are in it is likely that visible lights and number plates are mandatory by law. Additional light boards and supplementary plates can be sourced, but as Yakima now has a complete product, it makes it a whole lot easier. Order your extra plate, fit the rack on the towball, plug it in, and you're away.

Get the rack fitted

Deferring to trial by error rather than reading instructions, the Yakima FoldClick 2 is very easy to understand. With the built-in handle, you place the rack vertically onto the towball, then fold the rack down until it clicks, and the red indicator switches to green. With an audible and visual clue you can't go wrong. There are keys to lock the rack on so now is the time to do it. You then fold out the light units by releasing their tabs, then fold out the wheel trays. Plug the wiring in and the rack is set.

Whether you pop for the clip on ramp or not, loading the bikes is pretty easy. I found doing the bike closer to the vehicle first easiest, with the driveside facing the back of the vehicle. There are two removable and lockable arms to secure the bike in place. You'll use the short one for the bike closest to the vehicle. Finding the exact point to clamp and where to mount the arm does take some trial and error, and it's not unlike knowing the best way to pack your car boot or ute tray. You'll find the ideal way and stick to it. I would recommend the clamp pointing down or sideways, and not up for the best grip. The second bike takes a bit more Tetris skills as with any other rack of this type. Pedals, seat posts and bars can all be in the wrong place, but with dropper posts the norm getting it right shouldn't be hard.

In use on the road

As the Yakima FoldClick 2 is a rack mounted onto a towball, I did expect a little more play given the Isuzu D-MAX I was using it on had a 50mm hitch with a towball attached - so there are two connections for movement. But with the bolt on the towball tightened in the hitch firmly it was rock solid - even when I had two Norco Sight VLT eMTBS fitted! With a wheelbase a bit over 1200mm and weight around 23kg per bike the rack was still perfect. With a 60kg max load carting around a couple of eMTBs isn't a drama for the rack, which is great considering the weight of the unit. Bear in mind the FoldClick 3 can take a third bike, but the overall weight limit of 60kg remains. The wheelbase would be close to the limit though, as the wheel trays don't slide in and out to accept longer bikes, something the Yakima Dr. Tray and others do. The straps can take tyres up to 4 inches though so plus bikes or some fat bikes are fine. 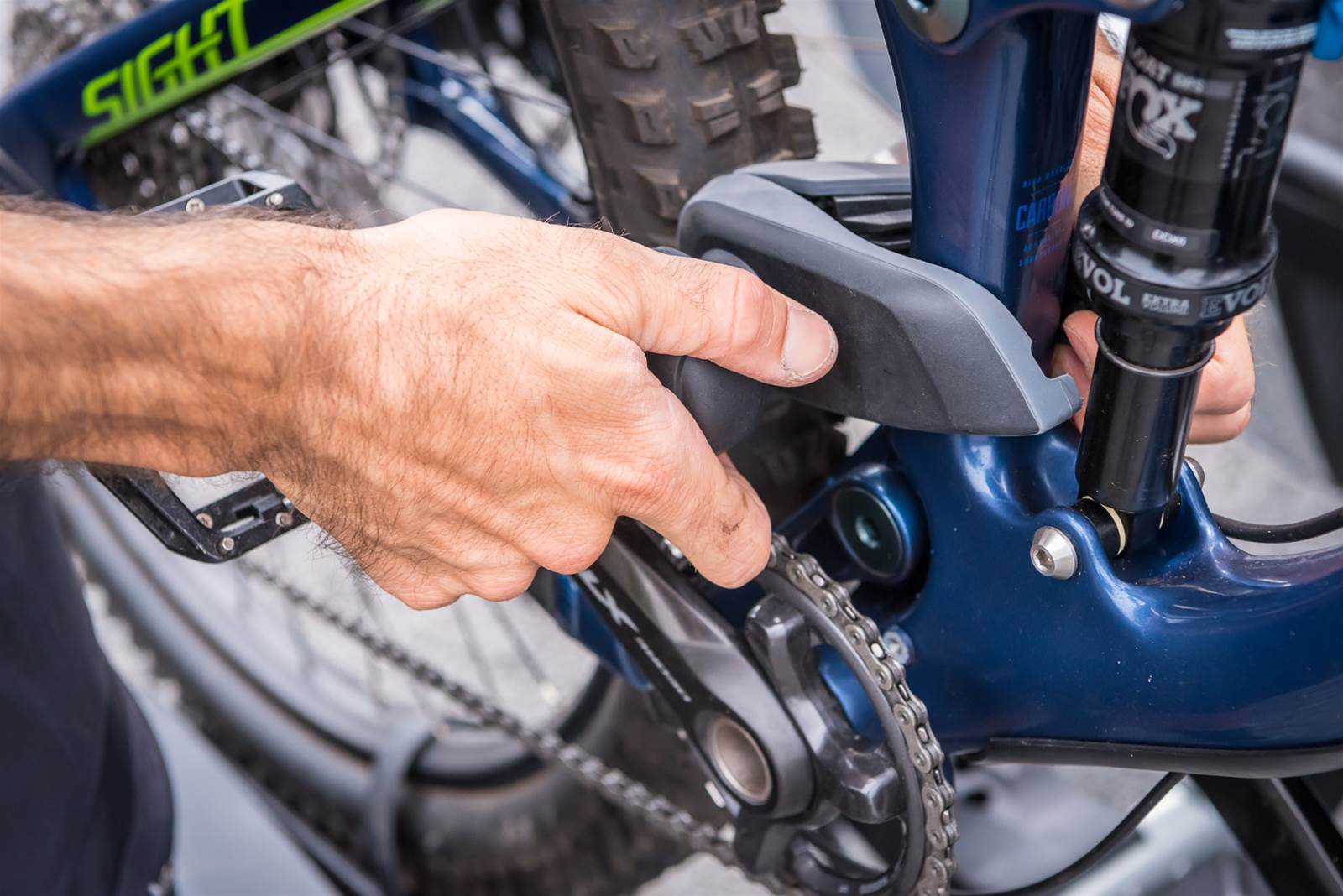 One great feature when using the rack is the option to fold it back away from the hatch or tray. Pushing down on the flat area below the number board unclicks the rack to swing downwards - obviously you will need to support the weight of your bikes, but this means you can still get to your helmets, shoes and riding gear if they are loaded into the boot. While we tested the Yakima FoldClick 2 on a big Isuzu D-MAX ute, I actually think it might be best suited to compact cars and apartment living - or just people who don't have limitless space for their toys. As the FoldClick 2 is built around a towball mount and is light and compact, this Yakima model is perfect for those who can't or don't want to leave their bike rack on full-time. It is quick and easy to fit, secure, and set to go right out of the box to be road-legal. And while we are reviewing this rack thinking of mountain bikes, the appeal is obviously far more broad, as the additional ramp will help people roll heavy e-bikes onto the rack, or assist them getting their bike up off the ground if lifting that weight isn't as easy as it used to be.

The FoldClick 2 is an excellent addition to the Yakima range. If you're looking for a rack for a ute for shuttles with your big bike - you're probably still best looking at the Dr. Tray or the new GateKeeper tailgate pad. But if you want an all in one rack that will work for just about any bike, including heavy eMTBs, and is easy to fit, store and use then Yakima have really hit the nail on the head.

Recommended products for you