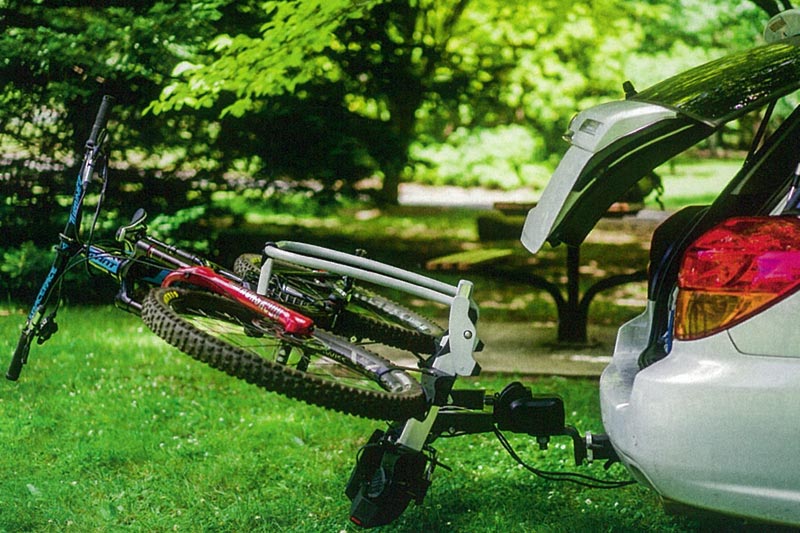 The new FoldClick range of tow ball mounted bike racks from Yakima represent some of the brands most premium offerings to date. The addition of lights and a number plate holder are features that we haven’t seen on Yakima racks in the past but they make a very welcome inclusion indeed. With its super slick design the FoldClick wouldn’t look out of place fitted to the rear of a Porsche 911, the new rack not only looks fantastic but it also boasts great performance and function. Thanks to Yakima’s innovative ‘Just Click’ system installing the rack to the car’s tow ball is a 1 person, 20 second job. That, combined with the fact that the rack is quite light weight means that you can pop it on and off your car without any fuss any time you decide to head to the trails. Oh yeah, the rack also folds down, into itself, very compact which is ideal for stashing it away between outings in the garage or cupboard or even in the book of your car.

With a max load listing of 60kg’s and the ability to hold tyres as wide as 4" (who the f*k is running 4" tyres by the way?) this rack is perfect for carrying heavy DH bikes and e-Bikes. For people that don’t want to lift their bike up and onto the rack Yakima offer an aftermarket landing ramp which allows you to push your bike up and onto the rack (seriously though, how lazy are you?)

The FoldClick holds each bike in place with a reception buckle that goes over each rim holding your wheels firmly into each of the tyre carriers, and then a removable ‘grip arm’ is placed around the bike’s frame at literally any spot that you feel is the best position. An integrated Lock System is built into the end of each arm to ensure your bikes can’t be easily stolen whilst they’re hanging out on the back of your car. The FoldClick also features a super practical tilting feature which allows access to the boot of your car when the carrier is loaded up with bikes.

Now, in case you’re wondering, ‘where has Yakima’s iconic red and black colour scheme gone?’ we asked the same question and the answer was that the FoldClick was originally designed for the European market, which tends to favour more neutral colourways, but then the rack’s function proved so successful that the brand decided to roll them out for the rest of their international markets. And to be fair, the silver and black appearance of this rack is very pleasing on the eyes!

Have Yakima gone and made themselves their best rear mounting bike rack ever with the FoldClick? Yeah, definitely, we think so.

Note: RRP listed in PDF is in AUD and correct at time of publication but subject to change.

Recommended products for you