If you’re like me, you probably have a couple of roof bars fitted to your vehicle for carrying toys like kayaks or surfboards, but they’re pretty useless when it comes to lugging around items that aren’t long (or rigid) enough to sit comfortably over the gap between them. This is where dedicated full-length roof racks come in handy, but they can be prohibitively expensive, especially if you only need to use them occasionally.

One of the most affordable and versatile solutions to this conundrum is to fit a roof basket to your roof bars, as it can be easily and quickly fitted when needed and just as easily removed when not.

The Yakima MegaWarrior rooftop cargo basket tested here is a clever, sturdy design that will easily fit to just about any roof bars, which made it ideally suited to my ute which was already equipped with a pair of genuine accessory bars when I bought the vehicle.

Unlike some flimsy lightweight baskets on the market, the MegaWarrior is made from weather-resistant heavy-duty steel tube, and it allows you to secure items up top such as swags, jerry cans, space cases and anything else that won’t fit across two standard roof bars. The carrying capacity of the MegaWarrior is determined by your vehicle’s roof capacity, less the 15.9kg of the MegaWarrior itself. In the case of my D22 Navara, that’s a handy 64.1kg of gear I can throw up on the roof – the equivalent of a couple of swags, a jerry can and a pair of recovery tracks, for example. And the MegaWarrior comes with a moveable load bar that can be positioned to make it easy to secure smaller items such as jerry cans, space case or for fitment of a bike rack or skis.

Attaching the MegaWarrior to Roof Bars

Attaching the MegaWarrior to your roof bars only takes around 10 minutes; simply lift it into place and screw it down using the provided clamps that secure around your vehicle’s roof bars. It’s just as easy (and quick) to remove, so if you’re concerned about security you can fit optional Locking Brackets ($80 a pair). Other accessories designed specifically for fitment to the MegaWarrior include an Axe/Shovel bracket ($65), a Hi-Lift Jack carrier ($109), a Light Mounting Bracket ($59), a Stretch Net ($59) and a Spare Tyre Carrier ($109). It really is a versatile and well-designed system.

The standard MegaWarrior is 132cm long and is 122cm wide but, for those with wagons, an optional 22-inch Extension ($189) can be fitted which increases overall length to a handy 188cm.

If you leave the MegaWarrior fitted to your vehicle when it’s not being used to carry gear, it will definitely add to wind noise on the open road, although the standard wind fairing that fits to the leading edge ensures this is not too intrusive. This wind fairing can be quickly folded down for carrying long items, so you can leave it permanently fitted.

For those who drive smaller vehicles, Yakima also has the LoadWarrior, which weighs in at 11.3kg and measures 111.8cm x 99cm. And if you don’t already have roof bars fitted to your vehicle, Yakima offers a wide selection that are compatible with both the MegaWarrior and the LoadWarrior, including the Whispbar range of bars and Yakima’s super-impressive LockN’Load system (which include the brand’s built-in bottle opener). The Yakima MegaWarrior is the ideal load carrying solution for those who don’t always carry a load on the roof of their vehicle. 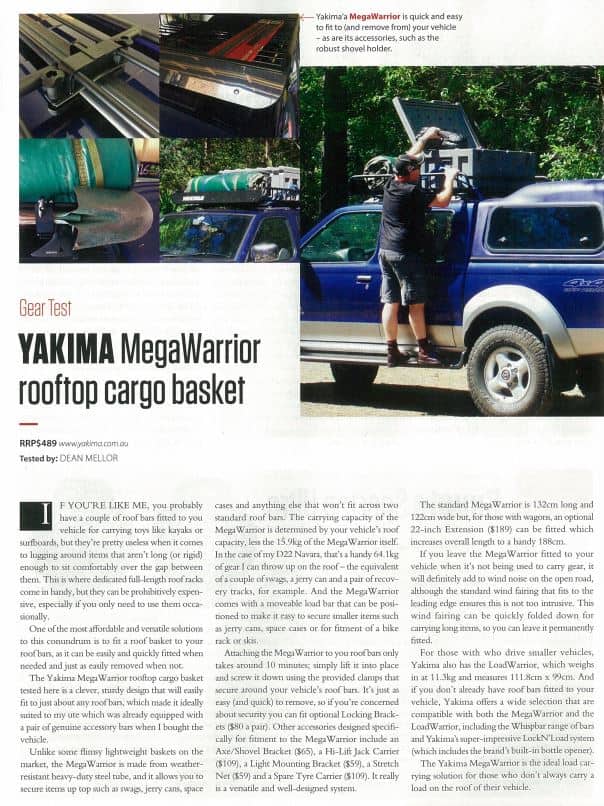