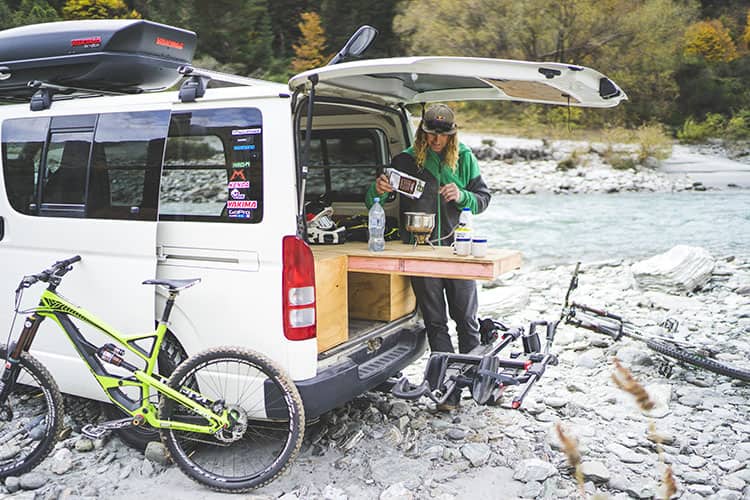 Kelly McGarry is known for his massive freeride lines, but it turns out his carpentry skills are pretty baller too. Take a look at this palace on wheels that he recently finished decking out. Kelly’s got all kinds of epic trips and adventure planned out for summer. Before he ups-anchor and sails off down the highway, let’s take a closer look at his beloved ‘Battle Van!’

Take a look at this beauty! You’ve been working on decking this van out for a while yeah? Run us through some of its standout features and bike-specific-mods? Yeah I was looking for a new set of wheels and was thinking about getting a meaty truck (which I love) so I could go anywhere I wanted, but I also wanted to be able to sleep in it and lock my fancy gear away from thieving buggers. I found the Van which was 4WD and then chucked some mud grippers on it and decked it out with some bulkheads to stash the gear and a decent stezza to raise the stoke! The Van is a bit of a compromise between a truck and a pussy 2WD that gets stuck on a banana peel. It’s been rad so far, it goes a few places and is great for camping and generally punching the world in the face.

Being a builder by trade did you do all the internal mods yourself? Yeah I did most of it myself. Threw the ‘ol tool belt on and just went for it! Would have been pretty expensive to get some other rooster to do it all so I just dived on in myself.

Can you sleep in the sucker? Yeah it’s prime for camping missions. We just throw a mattress on top of the compartments and it’s good to go.

It’s loaded with a full Yakima rack package too, yeah? How many bikes can you roll with? Yeah, the legends over at Yakima hooked me up with a load of their gear and kitted the Van out. I have a HoldUp rack that I use on a day to day basis which holds 2 bikes and then a “Plus 2” attachment for the HoldUp rack so I can stack 4 bikes on the back for roadies or shuttles. The HoldUp system is epic, it’s quick to chuck the bikes on and it holds them up away from each other so you don’t get RACK RASH!

Looks like a pretty serious sound system set-up, what’s the deal? Ha ha yeah, loaded a few speakers and an amp in the back for blasting the tunes at dirt jump sessions as well as drowning out my girlfriends bad singing on long road trips! Ha ha ha.

Tell us a bit about the kitchen set-up that it’s packing? I have a channel in the middle of the cabinets so I can still fit the Moto in the van, the cover which bridges the channel for our bed slides out the back and cantilevers, and doubles as a “Mean As” camping table. We have all the cooking gear stashed in the back compartments so she’s good to go for making a brew or cooking some brekkie!

Your moto slides on in there too? Wowzers, the ‘Battle Van’ is quite the adventure vehicle yeah, eh? Yeah I was going to make a full bulkhead platform that went right across the van, but then I was like... ‘What about the Moto!?’ So I made a channel the moto can slide into and a removable bridge between the bulkheads that slides in for the bed setup.

Who’s the 4-legged co-pilot? Cute little bastard! Ha ha that’s the Tui Dog! She’s our little Whippet and she is fast as hell and always up for a mission.

What kind of gear do you stash up on the roof in the Yakima SkyBox? I use it to chuck my muddy riding gear in and wet surf gear as well as surf boards, so they aren’t floating around in the van and we can just jump straight in and crash out on the bed.

What adventure have you got planned for this sucker this summer when you get back home from the contest season? Oh man, looking forward to getting home and blasting around the country with the bikes and boards! NZ is not a bad spot for camping missions, just pull over at a cool riding or surfing spot and you are good to go!