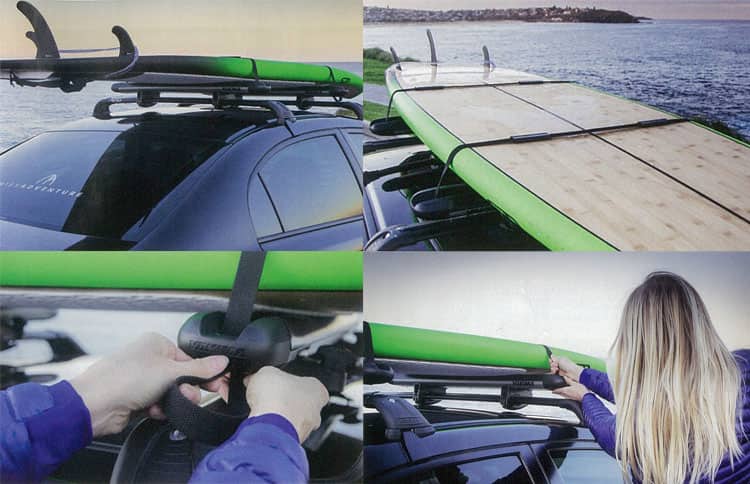 You hit the open road, zipping along at a 100km/h hunting down your next ocean adventure and then hear it: slap, slap, slap... the loose end of a ratchet strap beating wildly against the car.

After trying to ignore it, eventually, the constant slapping sees you pull over to the side of the highway to locate the culprit. You eventually find it and end up tying about six grannies-knots to shorten it up, and then stuff the rest of the strap in the car door.

That’s the thing with ratchet straps; they’re very useful and have their place but they can be very annoying. Further, if you tighten them around your board too zealously you risk applying too much pressure and cracking your rails. Even worse, the metal clasp has a tendency to inch its way around so you’ve got a perfect imprint in your fibreglass. Sure, you can wrap beach towels around your boards as protection, but they end up flapping and slapping as well.

Enter the Yakima SUPPUP, a roof-rack accessory that you can attach to your existing racks to better accommodate and transport your boards. With an inbuilt tie-down system they securely hug your boards, no matter what shape or size they are, SUPs and surfboards or a combo of both fit well. The cushioning on the rack makes for a soft landing and the optional front tie-down means the risk of it loosening itself or lifting off is non-existent.

The best thing about these racks is the folks at Yakima have thought of the little things like the nook inside the rack where you can tuck any loose ends, Viola! A super tidy, sleek, aerodynamic system with no more loose ends.

The only thing I would suggest is to make the SUPPUP lockable, both on the rack and on the strap so that not only are your boards theft-proof, so is your new SUPPUP.