TIPS TO GET THE PERFECT RACK 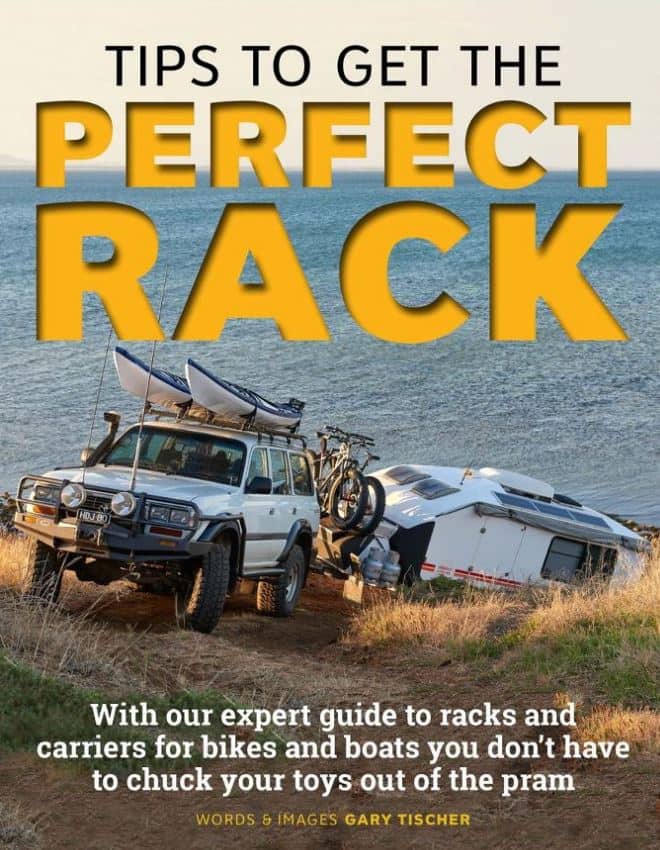 When we travel, we like to take our toys, but some are difficult to stow. For example, kayaks and bikes – hard to take buy equally hard to leave out. Most items will fit inside a vehicle or van but some are just too bulky. They may not weigh a great deal but getting them on the roof of a tow vehicle can be more difficult than it seems. The last thing you want to do is put your back out loading a bike or kayak. You also don’t want to damage them, as a bike these days can sometimes cost as much as a small car.

WHERE TO CARRY THEM?

If your van is big enough, you may be able to carry bikes inside…but do you really want to get them out every time you stop? How often you use them may help determine where you store them. Most people will carry items like bikes on the outside, which leaves a few options – on the front, top or back of the tow vehicle or van. Each location comes with a caveat – “it depends” – as each location has pros and cons. The terrain you travel over will also determine what may be suitable.

Even the type of bike you want to carry, as the modern bicycle frame comes in a variety of shapes, sizes and materials. The ideal loading configuration is to split the load front and rear as to not compromise trailer dynamics. This is particularly true if you’re carrying a few bikes.

Kayaks are easier to nominate loading positions for. The choice is on top of the tow vehicle or maybe on top of the camper or van. Kayaks may not weight more than 25kg but they are long, they can be blown by the wind and they will need to be lifted up around two metres. This is not an easy task for two people and it can be almost impossible for one person without the right equipment.

The best way to carry a bicycle on a vehicle for any distance is to support the bike by its own wheels. If supported on the frame you risk damaging your bike (and if it has a carbon frame, maybe even destroying it).

You are probably towing a trailer so it won’t be feasible to carry a bike on the rear of your vehicle all the time…it will really only be possible when the trailer is parked. This is not always the problem that it seems, as a couple of bike carriers made in Australia can be moved from van to tow vehicle relatively simply.

Both ISI and Gripsport supply racks to a number of caravan manufacturers which are designed for mounting on the drawbar, which can then be removed and mounted on the tow vehicle. These can carry up to four bikes at a time and will fold down easily to allow the rear tailgate of the vehicle to open. They also keep good departure angles if 4WDing. There are a number of good roof-mounted bike carriers available but I have found Yakima Highroller to be the best as it supports the front wheel with a double-sided strap, has a wide rack attachment and can be adapted to different types of racks. If you decide to carry your bike on the roof, just remember it’s there when there are low overhead branches, bridges or buildings.

Kayaks come in lots of colours and materials but are generally around 25kg and longer than 2.5 metres, with sea kayaks as long as 5.5 metres. Anyone who has tried to load a kayak onto the roof of any tow vehicle in the wind will know this is not as easy task. The difficulties of loading and unloading a kayak may even put people off taking one with them. However there are a few solutions.

A few years ago I searched for an accessory that I could load my kayak onto the roof of my 4WD, but in the end I made up my own cradle at the rear of the vehicle to assist. Since then, Yakima has made a product so simple yet so effective, that it’s the talk of the kayak crowd. The Showboat 66 has a roller that sliders out for easy loading / unloading of kayaks, SUPs and canoes. For me, it’s so worth the money and it saves on physio bills.

Depending on the type of kayak you have, cradles can be important to hold it in place. Plastic kayaks are pretty solid and can be strapped directly to the racks but may slide around a bit. Cradles are important for fiberglass or composite kayaks and surf skis – as they support the weight evenly on the hull. Most of the cradles are rubber to keep the kayak in place, but some rear cradles allow the kayak to slide more easily as it’s loaded / unloaded. The Yakima Sweetroll has smart rollers built in; while some Rhino carriers are felt-covered. My original cradles were all rubber, so I glued some all-weather carpet in the rear cradles and it does the trick. When loading kayaks, the most difficult part is getting one end onto the roof of the vehicle so it can then slide on. One marketing video I’ve seen completely missed that step out – making it all look so easy. When choosing to take a kayak, think how easy it will be to load / unload as this will limit its use if too difficult. 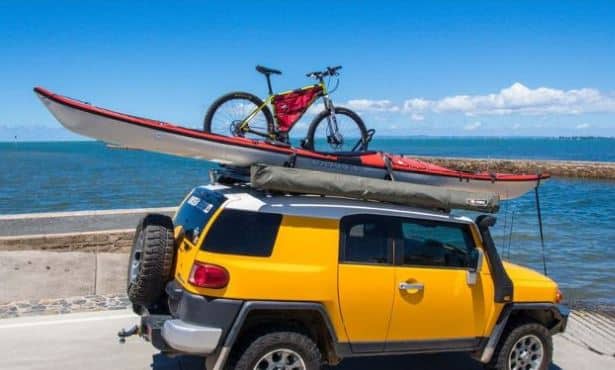 If you are like me, no one brand supplies all the attachments that will be needed for the different items you want to take. In most cases roof bars will suffice and will then make attaching different brands’ accessories relatively simple…but always check compatibility when purchasing something new as you may require a fitting kit.

One of the most common racks you will see on 4WD’s is the Rhino Pioneer Platform as it has so many options for attaching all sorts of items needed for work or play. Some alternative brand accessories are difficult (or impossible) to fit to a tray or platform without modification – so definitely check first. With a little modification, many more options are opened up. My FJ currently runs with an ARB roof rack support to which I have bolted the Rhino Pioneer Platform. I have also attached a Yakima Highroller bike carrier, Rhino kayak cradles and even the Yakima Showboat. To make them all fit together, I have had to drill a few holes and get some different brackets – but all have travelled many kilometres over corrugations without issue. If you choose to modify any product though, you may lose your warranty. For me, though, travelling with toys is more important.

AUSTRALIAN ROADS ARE TOUGH ON EQUIPMENT

Autobahns of Europe are pretty smooth, Australian motorways are just as smooth, but any regional road could be potentially fairly rough. Throw in a few corrugated dirt roads and your equipment needs to be up to the task. Products designed for Australian conditions and built in Australia are probably going to be the best choices when it comes to touring this great brown, red, and (occasionally) green land.