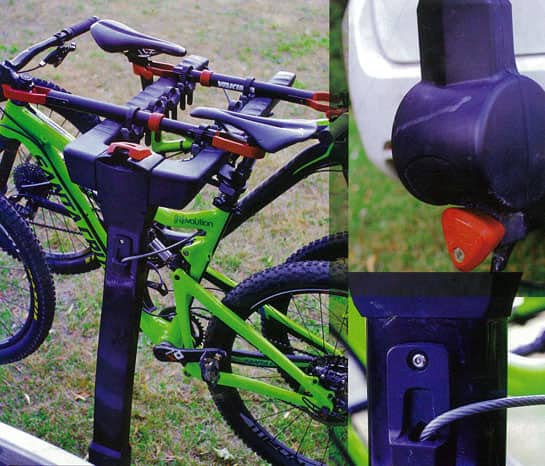 The FullTilt rack comes fully assembled out of the box. It slides straight into all standard 50mm and 30mm towbars and it's ace AutoPin locater aligns the rack into the hitch receiver at the perfect depth first time, every time. Once in place, you simply tighten the large red SpeedKnob so that the FullTilt is held firmly in place and then lock it in place with the key that comes in the box.

Our rack holds 4 bikes, however there is a 5 bike model also available. To load bikes to the car, extend the two main arms of the rack up to the horizontal position using the large red trigger finger leaver located at the top of the rack. You then slide each bike on, making sure that the heaviest bikes go on first (so that it is close to the vehicle) then secure each bike in place using the handy little ZipStrip buckles. The main arms of the rack that the bikes sit on are padded with a thick kind of rubber so your bike's paintwork won't get damaged and anti-sway cradles add further security by ensuring that the bikes can't bang into each other during transit.

Inbuilt Security with the FullTilt Rack

For added security (to keep those thieving bike bastards at bay) the rack features its own inbuilt security system. A thick metal cable can be extended from the back of the rack, then woven through the bikes that are being carried and the end of the cable is then locked in place on the underside at the front of the rack. The same key that locks the rack into the towball hitch also locks the cable that secures the bikes. Cool, eh! When you're not carrying a bike, simply lower the arms of the rack out of harm's way.

We've been using the FullTilt for a few months now with bikes constantly being loaded and unloaded on a near-daily basis and the rack is showing no real signs of wear or damage what so ever. It is definitely a tough rack, the unit does weigh just under 18kg after all. The FullTilt, like all Yakima products that we've played with, is very high quality. All the levers and moving parts feel nice and firm and have a positive feeling of engagement once in place.

For frames with wacky shaped top tubes, Yakima make a cool little accessory called a 'Toptube' which is basically a rail that connects to the bikes seat post and stem and creates a straight top tube so that pretty much any bike can be mounted to any of Yakima's hitch style racks. Top tubes are sold separately and cost $49.00 each.

Oh yeah, and it wouldn't be a Yakima rack if it didn't feature a built-in bottle opener to pop the top of a few coldies post-ride - cheers to that!