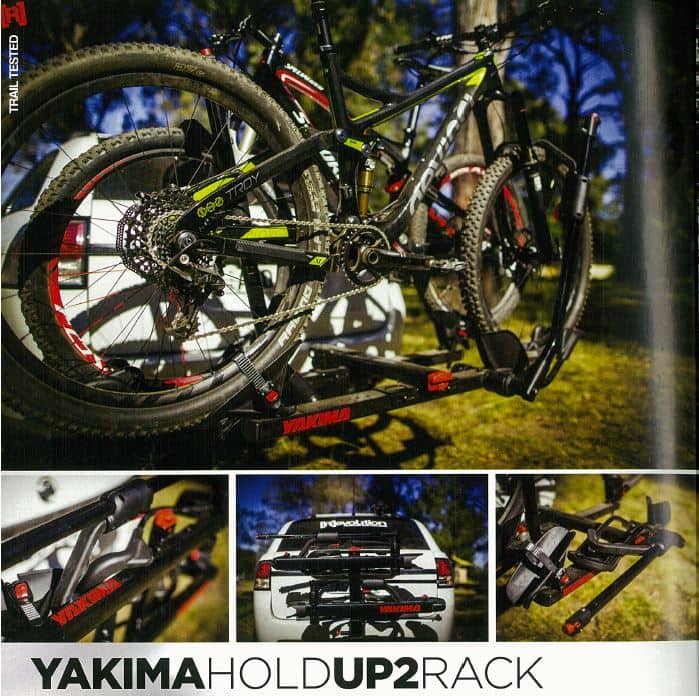 The Yakima HoldUp2 is without doubt our favourite hitch mounted bike rack ever. It's designed to be the fastest, easiest loading bike rack on the market. The rack features deep wheel cradles which hold the bike in place while you reach for the locking arms. The depth and pivoting functions of these cradles allows for bikes with any size wheels, from 14" kids bikes to 29ers. The wheel straps can also be secured out of the way while loading, to make things quicker. The locking arms are a ratchet arrangement that clamps down on the tyre rather than the frame, eliminating the risk of damaging your beautiful carbon trail rig. The tray assemblies are also adjustable horizontally, using Allen key bolts, to avoid the two bikes rubbing against each other. Or to control "handlebar fights as I like to say".

To attach the hitch mounted HoldUp2 to your vehicle you firstly need to have a Hayman Reese style 50mm (2") hitch receiver tow bar. The rack comes folded for easy storage, so it can be easily picked up and slid into the receiver. Then it's just a matter of putting through the locking pin and tightening it down. Don't forget to put the supplied lock on the other side to prevent it going walkabout. The rack then folds out and locks in place, as do the locking arms and wheel cradles. There is a spring loading pin that allows the rack to be tilted down, away from the vehicle, to allow for easier loading or to access the back of the cargo area. It does depend on the bike sitting on the rack whether you'll get the hatch opened or not. The rack also folds up out of the way when not in use. Each of the upright locking arms have a rectractable cable lock built into them, to keep bikes secure from scumbag bike thieves. All of the locks come keyed alike which is handy, but you can also have the barrels changed to suit your own keys, from any other Yakima products you might own.

The Yakima HoldUp 2 can carry two bikes weighing up to 27 kg per bike, however there is an optional extra add on carrier called the HoldUp + 2, that allows you to carry four bikes in total. A really sweet finishing touch feature of the HoldUp 2 is a bottle opener that has been built right into the end of the rack - ideal for those after ride lemonades back in the carpark. The Yakima HoldUp 2 bike racks are made from mild steel and come finished in powdercoated gloss black. It's a solid unit, once everything is locked down tight there isn't much movement, great for people like us who hate having something rattling in or on their car when driving. The HoldUp 2 bike racks retail for $499 which is really competitive, especially when compared to other racks on the market that have far less features. The Yakima range can be found at various bike shops, roof rack specialty stores, Anaconda and TJM.