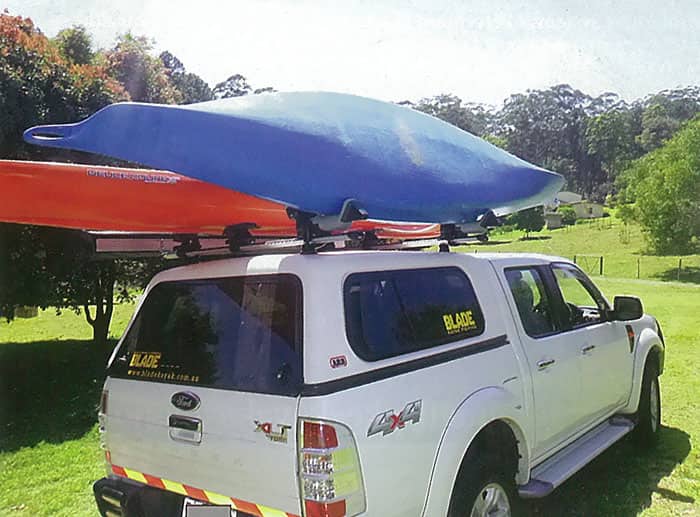 Possibly the only downside to owning and transporting a kayak is manoeuvring an unwieldy mass of plastic or fibreglass and placing on top of a vehicle in order to transport it to your favourite stretch of water.

Thankfully this task has become a whole lot easier as roof rack manufacturers are catering to the ever increasing number of people purchasing kayaks, not only for fishing but also general recreation. Drive along any major road of a weekend and count the number of kayaks on the tops of vehicles.

Yakima has a range of kayak transportation solutions that have been well thought out and offer a high degree of security and safety with ease of operation for kayak owners. They also offer a huge range of roof racks and other roof rack storage systems for push bikes, cargo, SUPs and so on.

We recently fitted a Yakima system to the BLADE 4x4. As you can see from the photos, we elected to set up the system on the canopy of the vehicle as opposed to the metal cab. Because the canopy is fibreglass, it had to be reinforced internally with canopy bows from ARB. The canopy bows incorporated metal posts, which protruded through the roof of the canopy. The Yakima racks were then secured to these posts, thereby transferring the load of the kayak etc... directly to the bows and tray of the ute, as opposed to the fibreglass roof of the canopy. A small amount of modification to the ARB posts was required for the Yakima racks to bolt directly to them. It sounds complicated but it really wasn’t as the fitting system designed by Yakima is about as universal as you can get. The modifications and complete fit out was completed in half a day by the Yakima dealer on the Sunshine Coast, Nambour Exhaust Towbars and 4x4 (www.mufflermen.com.au). Once the Yakima Whispbars were in place, the mufflermen then installed two different Yakima kayak transportation systems to the roof racks.

The first system installed was the SWEETROLL system that incorporates a rubber roller on the two rear pivoting supports enabling a kayak to be easily pushed over the vehicle roof with ease. When in position, the kayak hull is securely located atop soft rubberised pads for transportation.

The second design fitted was the BOWDOWN system, which compromises two “J” frames transporting the kayak on its side. This system enables several kayaks to be carried at one time limited only by the roof space available.

Yakima are aware of the annoying occurrence of wind noise associated with roof racks so both designs can be easily removed or simply folded down to eliminate this problem. Importantly, both systems are locked to the roof racks with a key, preventing theft.

The Yakima system are not uniquely compatible to Yakima roof racks and will easily fit the lock to all popular brands of roof racks without any modification. The kits come with tie-down straps and instructions as standard.

We really rate these kayak systems and recommended them to anyone who is frequently transporting kayaks, or any other equipment, on their roof racks. Whilst the Yakima racks themselves are very impressive, we also like the fact that the Yakima systems that bolt to the roof racks are compatible with any other brand of rack. Check out their full range at www.yakima.com.au