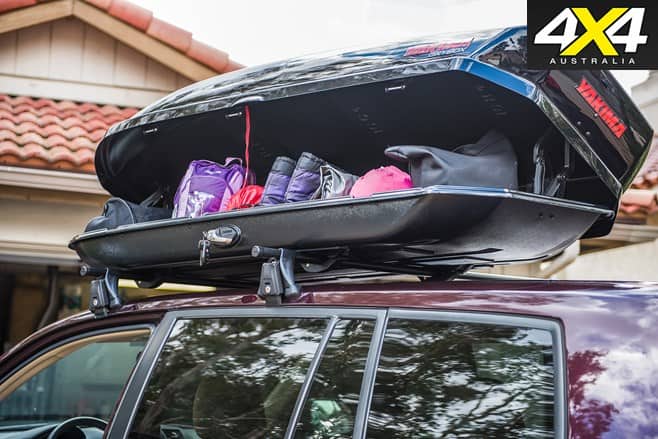 Having been a seriously keen off-road camper for years but having recently downsized my vehicle, it was easy to say “yes” when offered the chance to test a piece of equipment offering me more load space.

Yakima is a US-based company that has been making carrying equipment for vehicles – roof racks, bike racks/carriers, watercraft carrying stems, luggage boxes – for 40 years, garnering multiple awards for its product since.

The company’s roof-box range is headlined by the Skybox, first introduced to the market in 2006. It was a hit from its launch and has since earned a reputation as the toughest on the market, thanks to its reinforced nose and lid (to stop it vibrating/flapping in high wind), innovative dual-access design, and the fact the Skyboxes can be made from up to 80 per cent recycled material; the offcuts from the moulds are re-used in future boxes, ensuring minimal wastage. 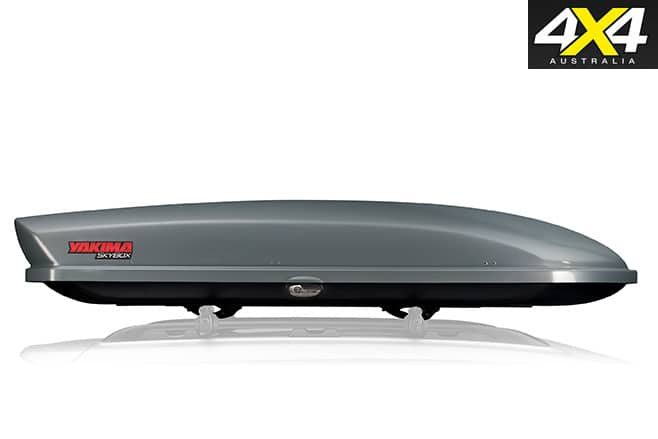 The Skybox Pro 16S (S denotes silver – it is also available in titanium and onyx black) has a load capacity of 450 litres (16 cubic feet, hence the 16 moniker) and is designed for vehicles with shorter roof lengths. It’s compatible with most popular roof bar shapes and its dimensions are 205cm long, 91cm wide and 38cm tall. Larger 18 and 21 models hold 510L and 590L respectively.

The mounting process to a roof bar is very simple. Quick-fit mounting clamps are integrated into the Skybox and are slide-adjustable to ensure they fit over the distance between the two roof bars. A lever-operated cam tightens the fit to the bar and there is a knob inside the box to ensure it is adjusted firmly. Having the box-attachment parts inside the box also ups the security level – there’s no way of accessing the attachment points of the box from outside, especially once you lock it.

The lock/latch system (the box has latches on both the driver and passenger side) is simple to operate and has shown no sign of failing – and it won’t lock until the lid is securely shut, another great safety back-up.

Its light weight makes installation a one-person job, if you possess reasonable strength – you’re looking at five minutes max. It really is bloody quick and easy to fit.

The same caveats apply when loading the Skybox as they do for any roof-mounted storage system: be sensible and only load light, bulky items if possible. Items such as tents, clothes, sleeping bags and prams can be loaded up there without a problem.

The higher profile that results from fitting a Skybox on your roof will increase wind drag, but the aerodynamic shape seems to do an okay job of lessening the impact on fuel consumption. I reckon we use around 10-15 per cent more fuel with the Skybox up top – freeway driving is where it has the most impact due to the higher speeds.

We’ve driven through a few rainstorms with it on top and there’s been no water ingress. This is due to the overlapping lip around the box and the fact it is so tightly secured once locked, with no way for a gap to form between the lid and the base.

The hinged arms that allow for the dual-sided access are cleverly designed and intrude minimally into available load space. They are made from strong plastic materials with oversized bearings in the hinged sections, to ensure durability. I have inadvertently belted them a few times with hard-surfaced gear and that doesn’t seem to have affected their operation at all.

Inside the box is a cargo pad and cargo net to make sure your gear doesn’t bang around loose inside, which is something we’ve really appreciated when occasionally using the entire 450 litres of space. The cargo net is affixed via four hooks on each side to stirrups screwed into the base of the Skybox – these are made from tough plastic, are easy to hook into and offer zero movement. We’ve had the net stretched pretty over bulky stuff and it has never failed.

The Skybox’s lock system is great as well. To unlock the lid and access the gear inside you need to have the key inserted, which makes for great peace of mind if you decide to leave the vehicle parked anywhere. 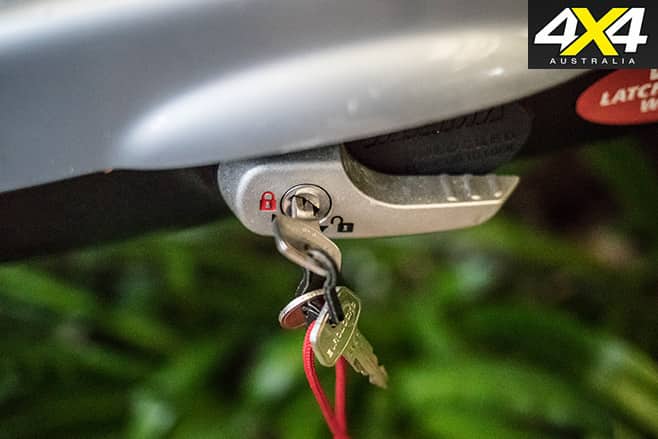 We’ve used toe Skybox for camping weekends and the annual sojourn down to the NSW far-south coast for Christmas. Having to fit hiking/MTB/paddle and camping gear in the vehicle – plus all the paraphernalia associated with two kids under five years of age – has seen the Skybox become our first got-to item pre-trip.

It’s coming up to four years of pretty regular use for our Yakima Skybox 16S and so far it has done the job perfectly. Some of the gear – and sheer amount of it – we’ve managed to fit in there has often been surprising. The unit’s simplicity of function, ease of fitting and removing, and build quality has made it one of our favourite pieces of touring equipment – and great value for any touring family, regardless of the size of your vehicle.